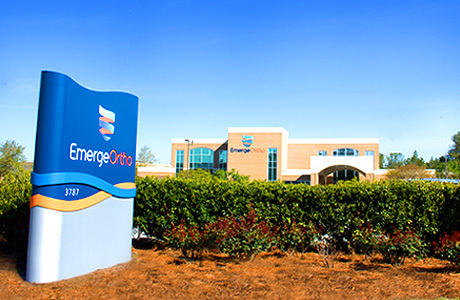 EmergeOrtho’s Shipyard Blvd. (Wilmington) Orthopedic Urgent Care services are available each Saturday from 9:00 am until 1:00 pm.

The urgent care is located at 3787 Shipyard Boulevard in Wilmington, NC 28403

EmergeOrtho’s Oleander Drive (Wilmington) Orthopedic Urgent Care services are available from 8:00 am until 5:00 pm Monday-Friday and each Saturday from 9:00 am until 1:00 pm. 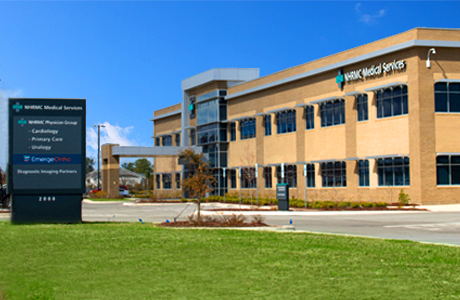 EmergeOrtho’s Jacksonville Orthopedic Urgent Care services are available from 8:00 am until 5:00 pm Monday-Friday. The urgent care is located at 2000 Brabham Avenue Suite 100 in Jacksonville, NC 28546. 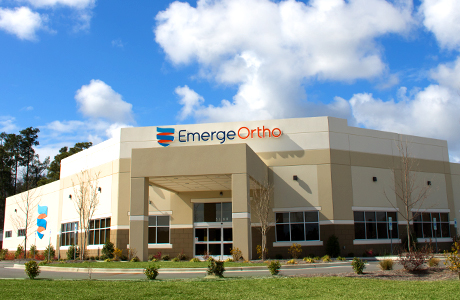 EmergeOrtho’s Shallotte Orthopedic Urgent Care services are available from 8:00 am until 5:00 pm Monday-Friday. The urgent care is located at 5160 Ocean Highway West in Shallotte NC 28470. Walk-ins are welcome! No appointment is necessary. 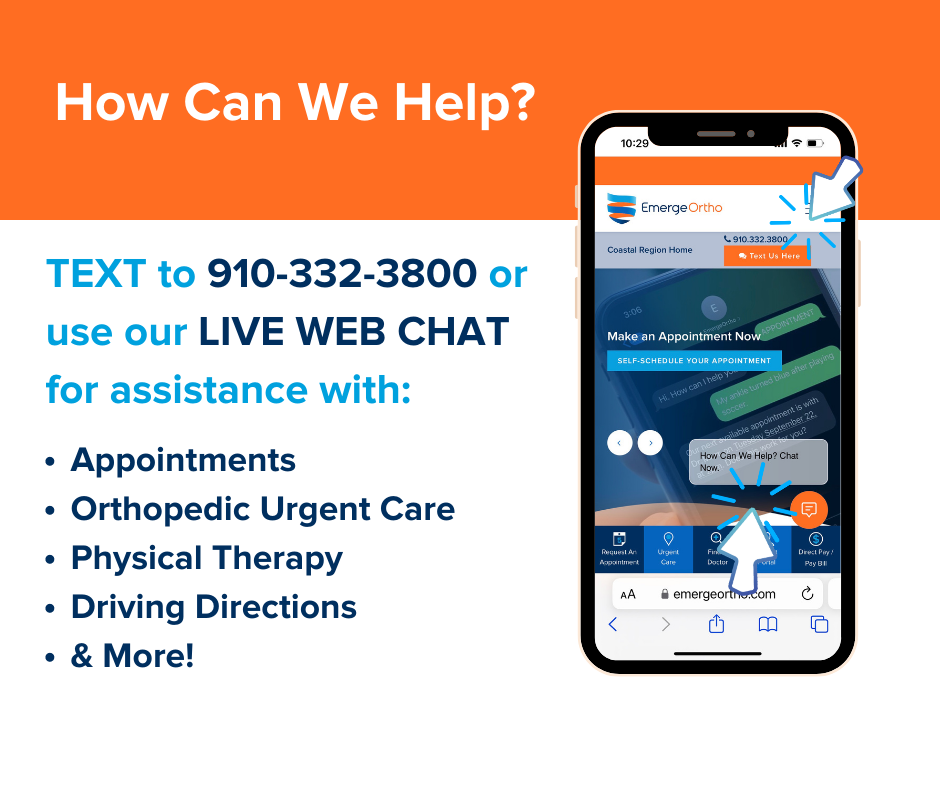 How Can We Help?

EmergeOrtho Coastal Region offers a secure texting feature as another convenient option for you to connect and communicate with our practice as well as our online web chat feature.

To obtain assistance, please TEXT the following information to receive help with your request:

-or- please use the online web chat feature located to the bottom right of our website pages.

Outpatient Joint Replacement Surgery: Getting You In, Out and Going Strong

Trust the Specialists at EmergeOrtho

Have surgery in the morning. Go home with a new hip or knee that same afternoon.

Just a decade ago, that scenario would have sounded like science fiction. Over the past 10 years, however, outpatient— or same-day— joint replacement surgery has become remarkably common.

Scott Hannum, MD, a joint replacement specialist with EmergeOrtho, said the trend toward doing joint replacement on an outpatient basis began about five years ago, and has increasingly become the norm in the last two to three years. He estimates that locally about 35 percent of hip replacements are outpatient, which means about 1,000 of the approximately 3,000 people who have the surgery go home the same day.

Nearly all partial knee replacements (about 90 percent) are outpatient, he said, but the more common total knee replacement is currently at about 15 percent. Dr. Hannum said most shoulder replacement patients could probably go home the same day, as well, but current Medicare policy does not allow for that.

Overall, insurance does play a role because different carriers have different policies for inpatient versus outpatient procedures. Patients should always check with their insurer when considering any type of surgery.

The How and Why of Outpatient Surgery

Dr. Hannum said that for many patients, outpatient surgery has been shown to be a safe and desirable option.

“There is no increased risk of complications, clots or infections, and no increase in pain or follow-up emergency room visits,” he commented. “In fact, some data shows outpatient surgeries lower all of those factors.”

However, Dr. Hannum pointed out that patients who are scheduled for outpatient surgery are generally healthier in the first place, so they are already more likely to do well and go home without complications.

Joint replacement specialist Shawn Hocker, MD, also of EmergeOrtho, expounded on Dr. Hannum’s comments. “The number one reason we have been able to do more joint replacements on an outpatient basis over the last four to five years is patient selection and optimization,” he said. “We get medical issues under control before a patient becomes a candidate for surgery. It might be blood sugar, anemia, obesity, smoking, dependence on pain medications or any number of other issues. We address those things prior to surgery in order to optimize how well the patient will do during and after surgery.”

Another EmergeOrtho joint replacement specialist, Michael Marushack, MD, commented on the outpatient trend over the past several decades. “Twenty years ago, a patient would stay in the hospital for two weeks after a hip replacement, but by the end of my residency, it was down to one week,” he said. “Through new techniques and technology, as well as advancements in pain medications, the time has been whittled down until we feel much more confidant letting people go home the same day.”

Dr. Marushack said many surgeries that used to be open procedures are now minimally invasive arthroscopic procedures. “We make much smaller incisions and don’t cut through muscle tissue,” he explained. “We move muscles out of the way and go between them, which makes healing so much easier.”

In 2013, EmergeOrtho’s Walter Frueh, MD, became the first surgeon in the area to do hip replacements on an outpatient basis, and he now is one of the most experienced in the state.

“Especially for surgeons who use the direct anterior approach, transitioning to outpatient was not difficult,” said Dr. Frueh. “With that approach, there are none of the post-operative hip precautions that are routine with the posterior and lateral approaches.” He explained that patients who have had the direct anterior procedure do not have to limit their posture or body position as they heal, so they can go home with more confidence and less stress.

“Our mantra is let your comfort be your guide,” he said.

While the direct anterior approach leads to a quicker recovery because of the lack of rules a patient has to follow to avoid a dislocation, Dr. Frueh pointed out that patients can go home the same day with any of the three approaches. He also said that outcomes are the same, no matter the approach. Long-term satisfaction one year out from the surgeries, regardless of technique, tends to be identical.

For knee replacements, Dr. Frueh said the use of press fit technology has made a significant difference. “The press fit technique does not use bone cement to attach the artificial knee,” he explained. Instead, porous metal implants allow the healthy bone to grow and permanently bond to the implant without the use of cement or glue. There is less time under anesthesia, as well, allowing for quicker recovery.

This biological fixation technique has been the standard in hips for the last 30 years, but has only been widely used in knees for the past ten. However, cement is still used if a patient has poor bone quality, added Dr. Frueh, which is the case about 20 percent of the time.

Dr. Hannum also pointed to smarter use of anesthesia. “It’s not as heavy as it once was, so it is much easier on the patient,” he explained. “We use a spinal anesthetic, which lasts about two hours, and is associated with fewer postoperative effects, such as nausea and vomiting, than general anesthesia.”

“What we do on the day of surgery has made a drastic difference,” agreed Dr. Hocker. “The introduction of [simple_tooltip content=’ Tranexamic Acid (TXA): medication used to treat or prevent excessive blood loss from major trauma, postpartum bleeding, surgery, tooth removal, nosebleeds, and heavy menstruation. It is also used for hereditary angioedema. It is taken either orally or injection into a vein.’]Tranexamic Acid (TXA)[/simple_tooltip], a drug that increases the body’s ability to limit blood loss, has changed things dramatically. When I started practicing in 2006, the transfusion rate for joint replacement surgeries was 12 to 15 percent; now it’s below one percent. We also have aids to block the nerves. Actual approaches have not changed in 10 years, but these steps have and they are responsible for the speed of recovery we now enjoy.”

Depending on their insurance, residents of southeastern North Carolina have several options for joint replacement surgery, including Novant Health and ambulatory surgery centers like SurgCare and Brunswick Surgery Center.

“Brunswick Surgery Center is brand new with the latest technology,” said Dr. Hocker. “We took what we have learned in our decades of practice and applied it to building the surgery center.”

“Within the facility, we also created a teaching center to train other surgeons,” added Dr. Frueh. “There is a video camera in the operating room that can do a live feed directly into a conference room so doctors can watch surgery in real time.” Dr. Frueh and Dr. Hannum teach the direct anterior approach for hip replacements to other surgeons, and they consult with an implant manufacturer on the design and development of new implant technologies for both hip and knee.

Savings of both time and money factor in, as well.

“The trend toward more outpatient surgery is because it has numerous patient benefits and it can be half the price for the same procedure,” said Dr. Marushack. For patients who have a high deductible insurance plan, that can make a big difference.

“The average time a patient is at Brunswick Surgery Center for a joint replacement surgery is three and a half hours,” he said Dr. Frueh, underscoring the facility’s efficiency. “That’s from the time the patient arrives until he or she goes home. The longest one we’ve had was four and half hours.”

“Regardless of where the surgery is performed, Southeastern North Carolina is a great place to have joint replacement surgery,” summarized Dr. Marushack. “We have topnotch facilities and the doctors in our group have trained at the best medical centers in the United States. Wilmington is a great place to live, so it isn’t hard to recruit great doctors.”

Eric J. Lescault, DO, a board-certified joint replacement specialist at EmergeOrtho agreed. “We have a very large retiree population here, and we need to be on the forefront of providing state-of-the-art orthopedic care,” he said. “Age is an important factor in many conditions that lead to joint replacement, including arthritis.” Dr. Lescault is the region’s first surgeon to be certified on the Mako SmartRobotics Total Knee System, which is currently offered at J. Arthur Dosher Memorial Hospital in Southport.

“To become an expert, you have to have experience,” said Dr. Hocker. “Joint replacement specialists in southeastern North Carolina rank tenth nationally in volume of Medicare joint replacement surgeries. Our region also offers patients superb anesthesiology and physical therapy teams, plus excellent facilities. You can’t get better anywhere else.” 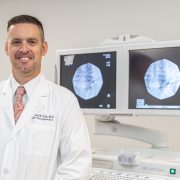 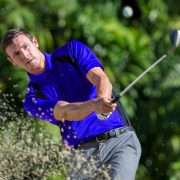 Master Your Golf Game With an Augusta-Worthy Warm-Up Routine